The Death of Harold Hartline by Ed West Jr
Genre: Supernatural Thriller
Price: $2.99
Where to Get It:
Amazon
*
*
*
What he also was blissfully unaware of this beautiful Friday morning in May was that something had slowly been infiltrating his seemingly perfect world. The invasion was nearly complete, but the worst was yet to come.
“I think you know, Stevie boy. And if you continue to refuse you will collect sin’s wages. I will personally be responsible for dragging you to hell myself,” the thing that was not Officer Jeffries said and then turned back to the closet.
%
What they’re saying:
*
When I first received this book, I was in a quandary. I had just purchased a long-anticipated book from George RR Martin, “A Dance with Dragons”, and was aching to read it. I started to thumb through “Hartline” and soon forgot about Dragons. Ed West Jr. has potrayed his characters with such depth and believability, and set out such an intriguing plot, that you feel yourself pulled into the narrative. That grumbling in your stomach is the lunch you missed because you are too engrossed in this book. The relationships between the protagonist, his potential new girlfriend, his quirky and funny dog, and his dead roommate create a lush backdrop for the terrors to come. The warmth and breadth of the prose remind me of a young Stephen King. Excellent work, Mr. West!

The Erlking: A Mick Chandra Mystery by Rebecca Yount
GENRE: Crime
PRICE: $.99
Where to Get It:

*
Detective Inspector, Mick Chandra of New Scotland Yard, struggles to
link the murder of the young wife of a popular British Member of
Parliament to the seemingly random death by drowning in a north London
canal of 8-year-old Josie Stephens. The forensic pathologist discovers
that Josie was abused before she was murdered. Mick is informed by a
Quaker Friend who knew Phoebe that she, too, may have been physically
abused. Mick realizes he is getting close to the fire when his live-in
love, American expatriate and renowned England-based concert pianist,
Jessica Beaumont, is suddenly harrassed. During a concert, someone even
takes a shot at her. Seconded to the Yard’s Pedophile Unit, Mick and his
partner, Sergeant Elizabeth Chang, receive help in breaking the case.
The Unit’s chief informs Mick that a notorious pedophile ring is working
out of north London, headed by someone who calls himself The Erlking.
Day by day, more children are reported missing in north London. How is
this linked to Phoebe’s death? What is the connection between Phoebe and
Josie? As Mick struggles to expose the identity of The Erlking, help
arrives from a most unexpected source.

WHAT THEY’RE SAYING ABOUT IT:

“I am in love with Rebecca Yount’s writing….I can’t wait to read the third installment in this series and I urge you all to get the first two books as soon as possible. I envision a series of movies on these books and can’t wait to say I knew Mike Chandra from the beginning.”–TheBookTree.blogspot.com 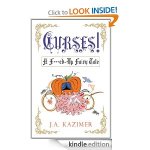 I’m no hero.  In fact, up until a couple of days ago, I was the villain. Kidnapped  maidens, scared kids, stole magic tchotchkes—until I got into a little  scrape with the union. Now I’m cursed with the worst fate in New Never  City—no matter what I do, I gotta be nice.

So when a head-case princess  named Asia barges into my apartment and asks me to find out who whacked  her stepsister, Cinderella, I have no choice but to help her. And I’m  more than willing to head back to her parents’ castle and do some  investigating if it means I can get into her black leather cat suit.  Except this twisted sister has a family nutty enough to send the Biggest Baddest Wolf running for the hills—and a freaky little curse of her  own. . .

LANTERN IN THE MIST by Liliana Shelbrook
Genre: Women’s fiction, Historical
Price: $2.99
Where to Get It:
Amazon

This Book is part one in a three part trilogy.  In 1899, stunning Kathleen Colby finds herself forced to embark on a perilous adventure with her disabled sister across America. During this unparalleled journey from Alaska to New York, she encounters dangerous characters, meets an attractive man of many secrets, and discovers what it is to be a woman in the late 1890s. This amazing trip will eventually change the naive Kathleen into…the new woman of the early twentieth-century.

“This is a fascinating and well written story with an excellent plot, lots of strong characters. Kathleen stands out as a strong woman of her time. I could not stop reading this book, I highly reccommend it. ” (Amazon)

“Really enjoyed this book. It was hard to put it down and I can’t wait for the next book. Very well done!” (Amazon)

The Day Detroit Went Dark by John Silver
Genre: Thriller
Price: $2.99
Where to Get It:
Amazon
*
*

Caught in the middle of a fatal car chase and drug fueled gun battle, Clive Bradshaw decides to call it quits, leave the city and live a simpler life with his wife Emily and young daughter Amy. Emily drops him off at the foot of Detroit on his last day of work. Clive steps out of the car and into a city on the verge of collapse, rife with corruption, no city services, overworked and underpaid police and fire departments manned by skeleton crews, fighting a hopeless battle against brazen, uncontrolled crime.

…then the pulses hit…

Everything that produces or relies on electricity is destroyed. The electrical grid, vehicles, aircraft control systems, machinery, communications, computers, refrigeration, water pumping stations, all the systems that support everyday life, gone in an instant. Nothing gets into the city and street gangs rule supreme. Chaos reigns, but it’s all overshadowed by an outbreak of a deadly disease, bubonic plague. The disease threatens not only Detroit but the entire country. The plague must be contained…at all costs. Follow Clive as he struggles to survive, find Emily and Amy and avoid the plague in The Day Detroit Went Dark.

A Girl And Her Monster (Rune Breaker, #1) by Landon Porter
Genre: Fantasy, Action/Adventure
Price: $2.99
Where to Get It:
Amazon
*
*

There is a legend in the world that tells of a weapon sought after by
only the most wicked of souls. Passed down through the years since
before the coming of the gods, it grants its master the power to
conquer and rule. The Rune Breaker.

After decades of dormancy, it just found a new master in Taylin, an
escaped slave, who stumbled upon its resting place and found it bound
to her will. But as it happens, the Rune Breaker is really a person:
the shapeshifting master and dark mage, Ru Brakar, who has been cursed
to serve whoever finds him since prehistory.

Taylin refuses to keep a slave, but an accidental order to Ru lands
them both flung far into the future, where they must rely on one
another and their new allies to brave a world alien to both of them
and the attentions of a foe who stalks them in hopes of gaining access
to a power beyond the gods.

Collects the first book of the web serial novel, Rune Breaker by
Landon Porter with cover art by Clay Kronke.

“The world is very new and imaginatively described. The characters all
have depth and layers, and the magic system is fresh and unique. “

“I bought this on a whim and was blown away.”

“This book is easily the most engaging fantasy novels I have
downloaded. The world and the plot draw you in quickly and seamlessly.”

Ashes in the Fall by Christopher Martinez
Type: Short Novel
Genre: Fantasy
Price: $0.99
Where to Get It:
Amazon
(
(

Anger is a gift.

The Arusyan Empire controls half the known  world, and its borders are still expanding. After ruthlessly conquering  Somaria, the king turns his armies westward and leaves his son, Prince  Azelas, to ward the southlands.
Against the mighty empire stands Carleon Orion, a former imperial soldier now leading the southerners in rebellion. Using their shared hatred of the Arusyans, Carleon took a  band of outcasts and rogues and turned them into deadly warriors.

Caught in the wake of the escalating conflict, Danario Solidor is taken in by  the rebels after his village is burned to the ground. He finds other  orphaned children like himself, and together they train and wait for the day they can avenge their loved ones.

Ashes in the Fall is a  new action-packed adventure about a young boy and an ex-soldier  struggling to carry on after their lives have been turned to ashes by  the empire.

“If you like books like The Sword of Truth series, or The Lord of the  Rings, you will most likely enjoy this book even though there is no  magic in the book.”