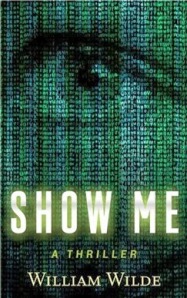 Show Me by William Wilde
Genre: Suspense Thriller
Price: $2.99
Where to Get It:
Amazon

Sometimes, one mistake can come back to get you.

Kay Newman’s foolish public flashing stunt is seen by a disturbed watcher, someone who wants her to display herself again for him alone. The anonymous phone caller has one menacing demand: “Show me!”

At the same time, two Seattle Police detectives are trying to stop a string of violent assaults by a serial predator on local real estate agents like Kay. The police don’t think this predator is the same person who’s harassing Kay, but what if they’re wrong? What if it’s not a random stranger at all who’s tormenting Kay, but someone closer who she already knows?

“Has an air of suspense that gives you an edge-of-the-seat feeling.” – Coffee Time Romance Reviews

“If you’re looking for an interesting Mystery-Thriller, this would be a very good choice!” – Huntress Reviews 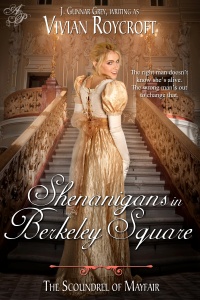 Shenanigans in Berkeley Square by Vivian Roycroft
Genre: Regency romance
Price: normally $3.99, currently on sale (for the next month) at 99¢
Where to Get It:
Amazon Amazon UK BN iBooks Kobo Smashwords

The right man doesn’t know she’s alive. The wrong man’s out to change that.

Coralie Busche can only admire Kenneth Rainier from afar. He’s a most handsome philosopher of the Romantic movement and for months she’s eavesdropped on his conversations at the coffee house. If only she had the courage to join his debates… and perhaps more. Her feminine education of singing and sewing could be of no interest to such a man — but then that vexing rake, the Duke of Cumberland, brings her to Rainier’s attention and she can’t hide any longer.

Rainier has lived with his mercenary sisters for too long to suffer any illusions about women. They value money, position, and precedence, not life’s important things such as poetry or painting, and only very lucky men find true love. But when he notices Cumberland staring at a dark-eyed beauty hiding in the coffee house’s corner, Rainier is smitten. Perhaps there’s a chance he could be one of those lucky men.

Cinderella meets Romeo and Juliet with a gorgeous gown, an unusual ducal matchmaker with motives of his own, and two cynical, jealous sisters. With All Hallow’s Eve approaching, tempers flaring, and a duelist’s challenge thrown down, how can His Grace, the Scoundrel of Mayfair, teach some loving sense to two soaring sensibilities?

Vivian Roycroft surprises the reader with the twists and turns of this plot.

It is pure escapism and a great read!