Hunter Cell by Joshua Dyer
Genre: Sci-fi thriller
Price: $2.99
Where to Get It:
Amazon
*
*
*
They are a well-oiled killing machine given the legal authority by their government to assassinate US criminals. The agents’ targets are clueless as to who they are, when they’re coming, or where these assassins will ultimately take their lives. Conspiracy theorists speculate on their existence. The local authorities turn a blind eye to their aftermath. That’s exactly how the Hunter Cell wants it to be.
^
Now the threads of the Cell’s perfect system are unraveling. A simple embezzlement contract in the Pacific Northwest turns into a nationwide manhunt. Faceless vigilantes are interfering with it and other contracts across the board. A segment of the nation’s citizens will no longer stand for the wool being pulled over their eyes. Hunter Cell agents’ identities are being leaked into the mainstream. Now their lives and families are on the line. America’s best hunters are becoming the hunted.
%
What they’re saying about it:
%
“Loved Hunter Cell and can’t wait for the next book. What a great and unique concept!” – Alan.
“This book is well-written and fast-paced. I couldn’t put it down!” – James. 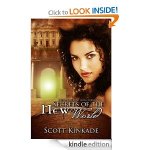 Secrets of the New World by Scott Kinkade
Type: Novel
Genre: Science fiction/alternative history/steampunk
Price: $3.50
Where to Get It:
Amazon
*
%
*
The year is 1792 (Infini Calendar). The new country of America is making great technological strides. Knowing this, Austria’s ruler Leopold II decides to travel to Washington personally in order to negotiate a treaty with the President in the hopes of securing new technology for his country.
%
The only problem? His little sister Farahilde. She’s unruly, unpredictable and has already threatened war with neighboring countries at least once. There’s no way Leopold can leave her home, so he orders her to come along on the journey to America. Oh, and her future–that is, arranged–husband Frederick William III is coming as well.
^
What dangers await them as they journey to the New World? What dangers await once they arrive? Will Farahilde prevent a war with America, or will she start one?
5
Also contains the story “Brilliant Dawn.” A sunken Spanish galleon containing gold may be the solution to France’s financial problems. It’s up to the newly appointed commander of the Ordre de la Tradition, Jeanne de Fleur, to lead her untested crew through this mission, but does she have the confidence to pull it off?

The Eden Project: Humanity’s Last Chance by DP Fitzsimons
Genre: Science Fiction, YA dystopian romance
Price: 99 cents
Where to Get It:
Amazon
*
*
*
There was only one rule: NEVER LEAVE THE DOME.
^
Inside the dome,  117 tube-born kids lived free of contamination. Trained since birth,  they were almost ready to launch their ships and leave the dying planet  behind. They were humanity’s final hope to avoid extinction. Their  mission would be to explore the farthest reaches of the galaxy seeking  out a habitable world free of the C-1 virus.
^
They tried not to  think of conditions outside the dome where the virus had driven the last of the uninfected into the ground, into dark bunkers where they waited  to be rooted out by cannibalistic hordes. Streets had become boneyards.  Weeds grew inside long-forgotten government buildings.
*
Fifteen-year-old Genevieve Fifthborn knew all this, she was fully aware that the world  was coming to an end, but on the island of The Eden Project she had much bigger problems, boy problems. Only her first love might risk far more  than a broken heart, it just might bring about the end of our species.
%
What they’re saying about it:
%
“Its 4 AM and I literally couldn’t put this book down all night.  What an amazingly well thought out story.  Its got Sci-Fi, a touch of horror,  suspense, intrigue, and romance.”

Society has collapsed: Destroyed by an unknown weapon of terrible power. The survivors turn on each other in desperation.
(
Twenty years later a new society has formed from the ruins. Utopia is the envy of the outside world: powerful, highly advanced and led by the  mysterious Circle of Eight. Fuelled by the limitless power of the ‘Genie Reactor’ its people want for nothing. Freedom and Equality exists in Utopia. Ellie, a survivor of the disaster has carved out a new life in Utopia. She is  wealthy and successful, but lonely and haunted by dreams of the past. A brutal murder will plunge her, and others, into a world of horrifying  revelations, death and madness, as she explores the dark side of Utopia: where a terrifying secret awaits and nothing is as it seems…

Flute of the Wind Queen (Outlander Leander: vol.1) by Eisah
Genre: Young Adult, Science Fiction, Fantasy
Price: $2.99
Where to get it:
Amazon

The light-hearted adventure of Leander, a young man on another world who dreams of being a treasure hunter. The world is painted from his view as he runs through the story; living in a country on the brink of war he continues to be optimistic and naive, but when his quest leads him to enemy territory he discovers it’s not what he expected.

“One of the strongest aspects of the novel is how vivid the main characters are. The give and take between Leander and Ellora early on has a perfect blend of mutual suspicion, humor as well as affection that I found immensely appealing.”

Assault on the Gods by Stephen Goldin
Price: normally $4.99, but on sale today, 2/18 only – use coupon code LW58X at purchase to get 50% off.
Where to Get It:
Smashwords
*
*
*
*
On a trading mission to a backwater planet, starship captain Ardeva Korrell finds herself with a fight on her hands; she and her small crew must battle an army of robots and defeat the tyrannical, god-like beings who have enslaved the native population. The task before them is straightforward: to storm the gates of Heaven itself!

All Roads Lead to Winter by Mark Fuller Dillon
Type: Novella
Genre: Erotic Science Fiction (Adults only)
Price: Free
Where to Get It:
Smashwords
*
*
*
The aliens are here, and now our lives are different: no wars, no  hunger, no exploitation. For political prisoner Thomas Bridge, there can be a strange new love; for the alien delegate, Avdryana, there can be  companionship in a world that she finds crowded and foreign. But even  with hope for the future, can there be an escape from the stifling ideas and expectations of the past?
*
“All Roads Lead to Winter” is a novella that deals with parallel worlds, politics, sexual tension, the grip of memory, the strength and  generosity of women, the beauty of being together. It also looks at the  pain of old lives that have not yet adjusted to the new.
*
An intimate drama with a vast background, a love story about heartbreak  and hope, it uses the framework of science fiction to examine the very  human costs of change and loss and new perspectives.

This complete trilogy of popular books tells the epic and fast-paced story of the future of humanity and the extraordinary benefits — and profound dangers — of powerful artificial intelligence.

Review one: “From start to finish I could not put this down. ITS AWESOME. The Technology, the mystery, the characters, all are AWESOME. If you have any interest whatsoever in the singularity and the future please read this.” —Adam Emrick

Review two: “This trilogy starts off well and keeps getting better the whole way through – amazing how the authour can achieve this! You need a very good excuse to stop reading cause you will not want to! Lots of science and fiction and very well written.” —Isaac Laurin

Review three: “Enjoy this series very much. Lost a lot of sleep staying up at night. Cool thing about this book is you can change it up and read the second and third book first then read the first which is how the series initially came out. Highly recommend reading. Look forward to reading some other work.” —Christina

It was supposed to be a game. The idle rich of galactic Society loved to invent useless little games to keep themselves      occupied–and the greatest was the Scavenger Hunt. Visit different worlds, pick up hard-to-get items that can’t simply be bought, and have a fine time. A clever way to pass empty moments.

Tyla deVrie and her twin brother, Bred, follow the family tradition of entering the Scavenger Hunt. But little do they      realize as they hop from planet to planet aboard Bred’s decadent space yacht that the Scavenger Hunt is far more than a game; it will irrevocably change their lives. That is, if it doesn’t end them first.

“Honestly, I could use every exclamatory word in the dictionary, and it wouldn’t be a good enough word to describe how excellent this novel is… This is one of the best science fiction novels I have ever read.”–Linell Jeppsen 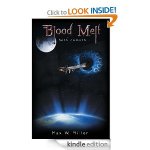 All aliens visiting Earth are not little green things with exaggerated, oval shaped eyes. That’s what Avani Darrisaw found out when she gazed into the honey-brown irises of Seth, a prince from Amarka.

Sixteen year old Avani always knew there was more to the story about this secret war her father fought in—a war never broadcasted on the evening news. But when Counselor Vivian Brashear came from Savannah, Georgia, to her home in Winston Salem, her frustrations mounted even higher. The woman tells Avani that an alien Star Warrior has chosen her to help him come to earth, and that he must have talks with her. Avani tries to shrug-off the woman’s comments as the ranting of a lunatic, but still, her heart could not deny the gorgeous stranger now showing up in her dreams.

Pressured on every side, Avani feels she has no choice but to have these talks with Seth. Soon, their meetings throws the feisty teen into a tail spin for more reasons than one. Seth is trapped in a sphere and needs Avani to save him. She’d have to agree to undergo a ceremony, the Blood Melt, where Seth requires a deadly evacuation of her blood. As if the Blood Melt Ceremony wasn’t scary enough, if she consents to save him, a Walfarian Spiker, sworn enemy of the Amarkarues, would track and try to assassinate her. Find out whether Avani will risk her life to save Seth, and in return, how can Seth save her when he is imprisoned inside a disintegrating sphere?

Bargain eBooks
Create a free website or blog at WordPress.com.